Transitioning into the new Construction Act

On December 12, 2017, the Construction Lien Amendment Act, 2017 received Royal Assent. Many of the housekeeping and non-substantive amendments came into force that day. All substantive amendments have to await proclamation by the Lieutenant Governor, including the key provisions introducing prompt payment and adjudication. While as of today, the Act as we know it remains in force pretty much unchanged, that will change in the very near future.

Most of the procedural aspects of the new legislation will be prescribed by means of regulations. These regulations have reportedly been drafted and are currently being reviewed, but will not enter into force until early Spring at the earliest. The dates of entry into force of the remaining portions of the Act are currently unclear. Of the substantive amendments to come into force on proclamation, amendments to modernize the lien and holdback process will come into effect first. Prompt payment and adjudication provisions will take effect once the adjudicative body is established. The Government will provide notice to industry stakeholders prior to any changes taking effect.

Section 87.3(1) of the Construction Act governs the transition period, stating that the Act “as it read immediately before the day subsection 2(2) of the Construction Lien Amendment Act, 2017 came into force” will continue to apply with respect to an improvement where:

In other words, if a general contract is entered into before the new regime comes into effect, but a subcontract under that contract is entered into after the change, the entire improvement will be governed by the Act as it currently reads. “Procurement process” is not defined, but “the making of a request for qualifications”, “a request for proposals” and “a call for tenders” are listed as examples.

Subsection 2(2) of the Construction Lien Amendment Act, 2017 repeals the definition of “construction trade newspaper”. Why that particular amendment was chosen as trigger date for the transition provision is somewhat of a mystery.

Parts I.1, Prompt Payment, and II.1, Construction Dispute Interim Adjudication, will apply in respect of contracts and subcontracts entered into on or after the day subsection 11(1) of the Construction Lien Amendment Act, 2017 comes into force.

It is important to note, however, s. 87.3 itself is not yet in force, so at the time of writing, it is very much business as usual and the current Act applies.

Deadline to Preserve and Perfect Liens

Section 26 of the Act, which currently provides that a payer “may, without jeopardy, make payment of the holdback…”, will be changed to be made mandatory. Once the lien period has expired and no liens are left on title, the holdback “shall” be released. However, that provision is made “subject to” a new s. 27.1, which allows an owner to claim set-off, as long as this is done by way of a “Notice of Non-Payment due to Set-Off”, listing claims and amounts of claimed set-off.

New sections 26.1 and 26.2 will allow phased, annual or segmented release of holdback: the former on large, multi-year projects, the latter on projects with clearly separable improvements (e.g. AFP/P3 projects).

The Act specifically permits the contractual designation of a design phase for the purposes of phased release of holdback.

Deferral agreements may be entered into to exclude portions of work from the calculation of substantial performance so as to allow for early holdback release.

Disputes concerning timely release of holdback will be sent to adjudication, as discussed below.

The Act will provide for a prompt payment regime, applying to all public and private sector construction contracts and requiring payment within 28 days between the owner and general contractor upon submission of a “proper invoice”, i.e. a “properly documented invoice”. “Proper invoice” is defined as:

a written bill or other request for payment for services or materials in respect of an improvement under a contract, if it contains the following information and, subject to subsection 6.3 (2), meets any other requirements that the contract specifies:

Proper invoices must be given to an owner on a monthly basis, unless the contract provides otherwise.

Upon receiving full payment from the owner, the general contractor has seven days to pay those subcontractor(s) that were included in the invoice submitted to the owner for the services included in that invoice.

Upon receiving partial payment from the owner, the general contractor must pay its subcontractor(s) that were involved in the submitted invoice from that payment on a rateable basis. Where the money withheld by the owner relates to the work of a specific subcontractor, the money paid will be distributed among the other subcontractors rateably.

However, the owner, the general contractor or other payer will be allowed to set off against invoices by submitting a “Notice of Intention to Withhold Payment” within 7 days of receipt of a “proper invoice”, specifying the amount that is not being paid and detailing the reasons for the non-payment. 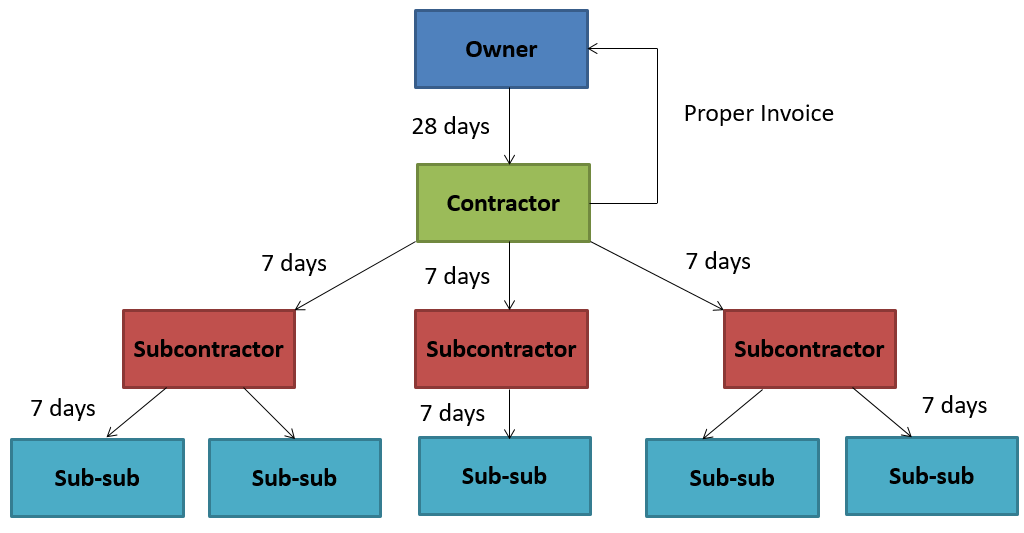 The Act will also provide for adjudication to enforce the prompt payment regime. The contractor or subcontractor can legally suspend work until paid. Mandatory interest rules apply, and reasonable costs incurred during the delayed payment must be reimbursed. The adjudicator’s determination, with reasons, is filed with the court and is subject to the same enforcement as any court order. Parties who disregard the adjudicator’s determination will be subject to garnishment, seizure of property, invasive examinations in aid of execution, etc.

Parties to Ontario construction contracts will have a right to refer certain disputes to interim adjudication. The parties are free to create contractual adjudication regimes, subject to the contractual regime being consistent with the Act. If the agreement falls below the requirements of the Act, the Act governs.

The following types of disputes may be referred to adjudication:

Authorized nominating authorities will be established to create and maintain a roster of qualified adjudicators. Lien rights will be maintained during the adjudication. 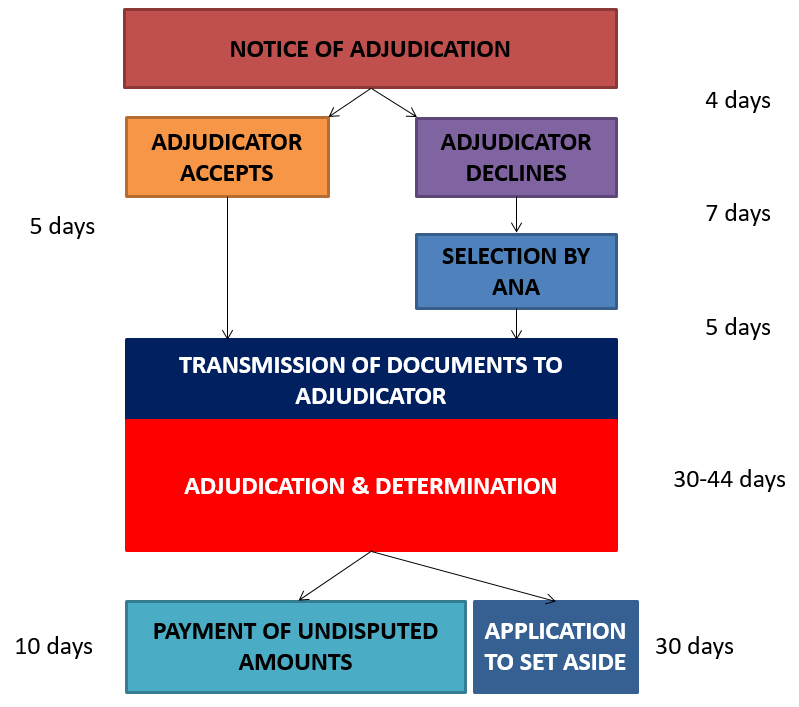 Section 13.12 provides the adjudicator with broad powers, some of which are decidedly more inquisitorial than those of a typical common law judge:

The adjudicator’s determination will be binding on an interim basis and, as such, be enforceable as if it were an order of the court. In other words, there is no need to go to court to obtain judgment on a determination; you already have a judgment, albeit an interim one. While an application to set aside a determination will only rarely succeed based on the very strict test stipulated by s. 13.18, nothing in the Act prevents a party from commencing proceedings in court or before an arbitrator to finally determine the matter. All the Act does is to keep the money flowing while that process takes place.

As mentioned above, neither prompt payment nor adjudication are happening yet; both regimes will apply only in respect of contracts and subcontracts entered into on or after the day subsection 11(1) of the Construction Lien Amendment Act, 2017 comes into force, which, given that we don’t even have a nominating authority at this point, is unlikely to happen before some time in 2019.